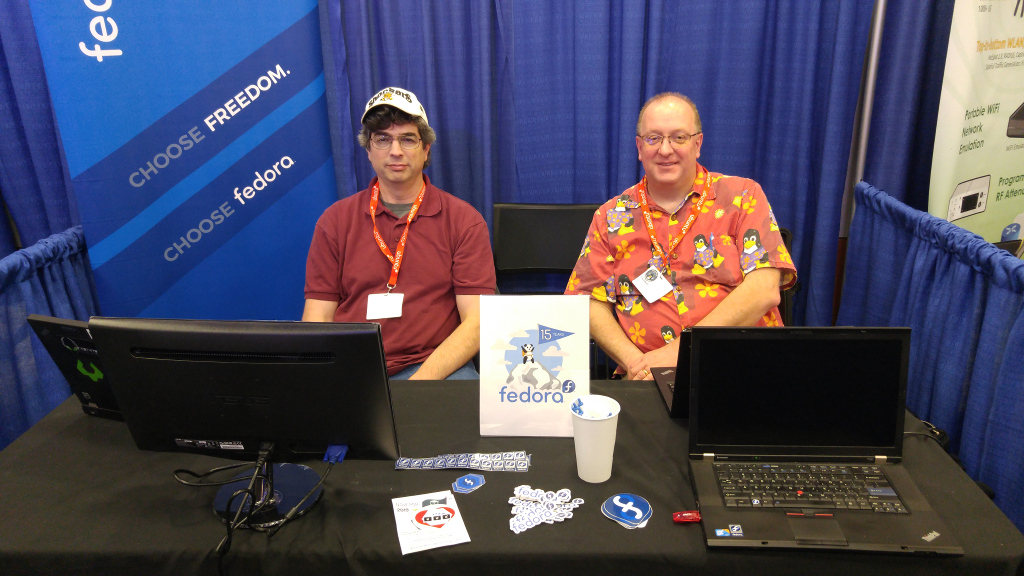 I went to LinuxFest NorthWest this year. This is a conference that I’ve heard about for many years, but never been able to go to. Mainly because I used to live in Illinois, a long way from Bellingham, Washington. But, now I live in Washington, and even though it’s six hours away, that’s not too bad. I also signed up to help Jeff Fitzmaurice with the Fedora booth. Jeff is a Fedora ambassador for the Seattle / Washington / NorthWest USA region. Jeff does not work in the I.T. or computer field, but is a wonderful Fedora hobbyist. He used Fedora at home with most everything. His daughter came the second day, with her Fedora desktop and Wacom drawing tablet. She drew some wonderful artwork using Krita on Fedora.

I really enjoyed the community vibe that was there. This is based at a college, yet felt professionally done. It’s the 20th anniversary of this LinuxFest, so I guess they have ironed out all the wrinkles. It felt alot like FLOCK, but without the overhanging “Red Hat” feel. They pay for the conference purely on volunteer donations, sponsors, and swag sales. Due to reasons, I wasn’t able to donate anything when I preregistered. There was nothing on my badge stating I hadn’t payed anything, and I was invited to every event. (Note: I did donate when I got there, but that didn’t change my badge at all.) I really liked that because this event is geared towards students and sometimes even a $10 fee is too much.

One of the main reasons I go to conferences is to meet people. Helping at the Fedora booth, when not in a presentation, allowed me to meet alot of people. Plus there was something for me, or them, to ask about. By far, the most common question I was asked was when Fedora 30 would be released. After that the questions were all over the place, from “What is a Linux distribution?” to “Are they thinking of dropping KVM from Fedora?”. There were a few questions about RHEL, and one about Scientific Linux going away. Not a single question on modularity.

Let’s build our own Internet-of-Things. - A good Internet of Things overview, specifically geared towards not using vendors cloud’s and locked in solutions. It was enhanced by Kathy Giori from Mozilla’s Web of Things. Showing how they are able to use the normally proprietary hardware, on your own mozilla IoT gateway.

Mozilla Project Things - Kathy Giori - Very good overview of the various things you can do with Mozilla’s IoT Gateway and lots of different things and rules. No video that I know of, which is a shame.

Web of Things API - Christian Paul - Compantion presentation to Mozilla Project Things. This is more indepth, explaining the API and how to bring in your own devices.

Automation with Node-Red - Rob Hartzenberg - This talk was a little light on how to get things hooked up to your own gateway, but it was very good on programming your IoT stuff with Node-Red. Although it is a drag and drop programming language, it is very versatile, has many plugins, and allows you to do many complicated, or simple, programs for your IoT things.

Other Presentations I Liked

Q&A Panel: Past, Present & Future (maddog, Kyle Rankin, Wimon Quigley) - My question was at 27:50. “If you were stranded on an island, had an unlimited power supply, but could only have one computer, what computer would you have” The real reason I knelt down was so the camera had a good shot of the back of my shirt.

*50 Years of *ix* - maddog - Just what the title says. Of course this experience is highly biased towards MadDog’s experiences. But it covers everything and is fun to listen to.

Early Technology and Ideas for the Future - Jeff Fitzmaurice - Telescopes, morse code, steam engines, printing presses. Early inventions ended up making significant changes in the world. Look at today and lets see what things might be changing our world now. No video.

Linux Sucks: in Space - Bryan Lunduke - Latest of the “Linux Sucks” presentations. Always good. I’m waiting for his youtube video to be released.