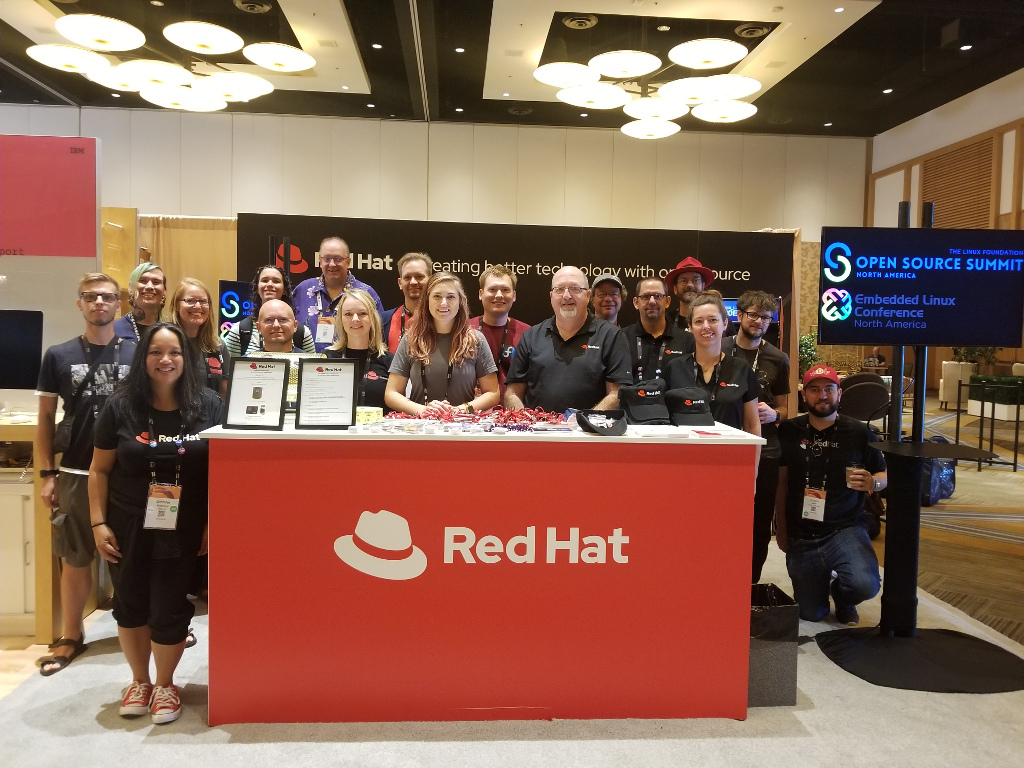 I went to OpenSource Summit North America in San Diego, California this year. It was also at the same time and place as the Embedded Linux Conference North America. As with past OSS and LinuxCon’s, there was no separation of events. It just means that there were a lot of talks/tutorials/presentations geared towards Embedded Linux and IoT.

I worked at the booth part time again this year. I enjoy working at the booth because it allows me to talk to a wide variety of people about Red Hat. This year was much better than last year, because I could talk about RHEL 8. At last years OpenSource Summit, I couldn’t talk about my work on RHEL8, so I would always say “I used to work on the OpenShift project.” Oddly enough, only two people asked me what I currently worked on last year.

This year I expected a lot of RHEL 8 questions, but I didn’t get any. I did get one question about Minimization, and that was about the most technical question I got. I mostly got asked how things were now that IBM had bought Red Hat. I was happy to let people know that from everything I see and hear, nothing had changed. Most people were happy to hear that. It was a little awkward that IBM’s booth was right next to Red Hat’s. It looked like it was on purpose, but if you look at the floor layout, they arranged the Platinum Sponsors in alphabetical order. There was no hidden meaning, and I think our Red Hat people mingled with the Intel people more than the IBM people.

The main reason I like going to Open Source Summit (OSS) is because of the diversity. Although this year was a little heavy on the embedded linux, I was still able to learn about the kernel, communities, AI and cloud. It is geared more towards companies and products, but there are plenty of presentations that aren’t thinly veiled sales pitches. I was pleasantly surprised to find that even most of the Keynotes were not sales pitches. That had been a problem in past years.

*** Understanding the Cultural Codes that Drive Behavior *** Michele Gelfand, Distinguished Professor and Author - A very good talk about tight cultures and loose cultures, what creates them, and what kind of people they create. This small summary doesn’t do it justice, watch the presentation if you can.

*** A.I. and Stephen Hawking ACAT *** Kairan Quazi, Student & Research Collaborator, Intel Labs’ Anticipatory Computing Lab - By far, one of my favorite presentations. At first it’s sort of neat hearing from a 10 year old genius giving his first public presentation. But soon that drops away and the technology and what he’s presenting takes over. The things they learned while giving Stephen Hawking a voice is amazing. And then trying to adapt that same technology so that other handicapped people can benefit. Good presentation, good content.

*** What Winning Open Source Looks Like *** Chris Wright, Chief Technology Officer, Red Hat - Chris is always a good speaker and he doesn’t disappoint. Has Open Source won? Yes it has. So what does winning look like. A look at communities, companies, interactions, and more.

*** Open Data @ Facebook *** Michael Cheng, Drishtie Patel, and Michal Migurski - Facebook - I both liked and didn’t like this presentation. It’s great to see how much they are able to help emergency planners, and communities. It’s also a bit on the scary side how they are able to see people migration and other trends, even if it’s anonymous.

*** The San Francisco Open Source Voting Project: A Status Report *** Tony Wasserman, Carnegie Mellon University - Voting is complicated, but that doesn’t mean open source can’t handle it. San Francisco’s attempt at Open Source Voting appears to be a long term commitment, not just a knee jerk reaction. Tony gave a very good talk on the progress they have made as well as the problems they have hit. Because of the San Francisco “sunshine law”, the extreme extent that they are open makes apache seem closed. I believe the most surprising thing about this talk was the section of their investigation of other “open source” voting systems. This was a talk I really wish was recorded.

*** What’s New with U-Boot? *** Simon Glass, Google - What’s new with u-boot in the past two years. You have to know what uboot is and generally how it works because this is geared towards u-boot users. But you don’t have to be a developer, it’s not going into the code.

*** Base Porting of Linux Kernel on RISC V Architecture ** G Satish Kumar, Cavium Networks - This was a very technical presentation, dealing with one person getting the kernel to work on one RISC-V board. I have to admit that at least half of the stuff was over my head, but it was still good to see what people do when they are porting a kernel to a new architecture.

*** The 7 (Unhealthy) Habits of Highly Effective IoT Marketing *** - Kathy Giori, Mozilla - This talk starts out explaining why the current trend of IoT silo’s (Nest, Alexa, etc..) are not very good for consumers. She goes on to talk about open standards that are out that will allow much more interoporability, as well as better security and privacy for end users. She then goes on to explain and talk about Mozilla’s Iot Gateway.

*** How to Grow Communities, Not Just Code *** Ruth Suehle, Red Hat - The title says it all. Too many times developers think they can just put their code out there and a community will grow around it. That rarely happens. Ruth gives some very good advice on how to make and grow a real community. I wish this was recorded because alot of her best advice came during the Q & A session at the end.

*** A Community-generated Content Strategy that Works *** - Jason Hibbets, Red Hat - The content at OpenSource.com is mostly cummunity written. Over 20% of the moderators are community moderators. Overall it is an effective community generated site. This presentation shows how they got that way, and how they are sustaining and growing the community participation.

Other Sessions and Keynotes

There are many other sessions that I went to, and that I wasn’t able to go to. Most of the keynotes and Sessions were recorded and are available online. My recommendation is to go to the agenda page, find what you want, and then go to the video recording page.