Three years to write Part 6. It’s not that it took me three years to have the shirt created. It was my perfectionism kicking in. There were several things about the shirt that only I could see. But since I could see them, that is what I saw. It stopped me from writting my final piece for a period of time.

I ordered my fabric from Spoonflower. I ordered the Kona® Cotton Ultra. This fabric is no longer available from Spoonflower. Although it is light enough to make a shirt, it is on the heavy side. Not something for summer. But it holds it’s colors well. Three years later and the shirt hasn’t faded.

The shirt I was making has a great big penguin on the back, and a stripe of white/grey flowers across the front. I felt it would be easiest to make the front and the back seperately. Two different patterns, printed on two different pieces of cloth. And it was easier. I just had to order enough of the back cloth for two big penguins. Then the rest was the front cloth.

Did people notice the color difference? No. Nobody but me.

I mentioned in Part 1 that my brothers seamstress made my first, purple Casual Tux shirt. I had my fabric sent directly to her, and paid her to make another shirt using the same shirt pattern as the previous shirt. Hmm … doesn’t sound too exciting, but that’s all the details.

I’ll let the pictures to do the talking. 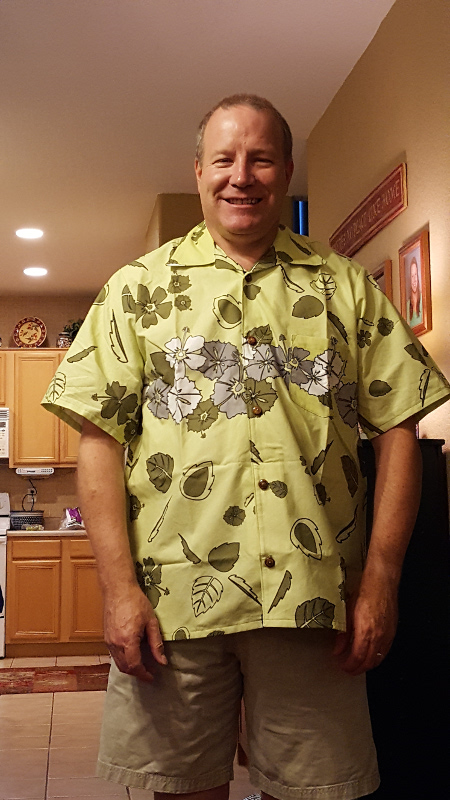 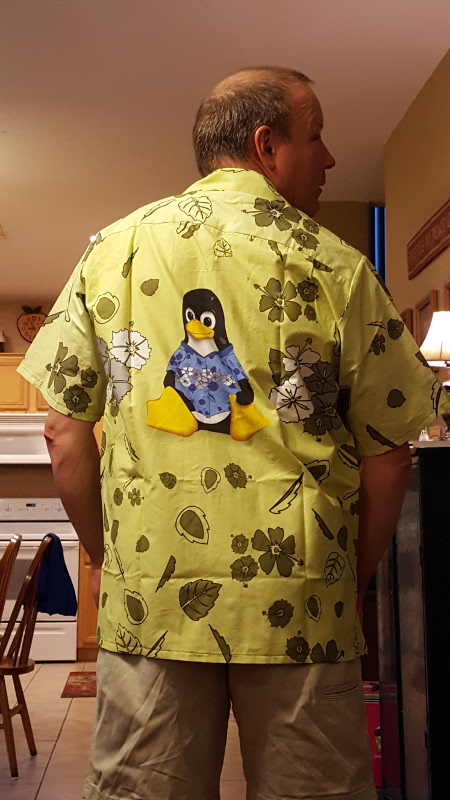 My journey for the Ultimate Hawaiian shirt has brought me to the realization that there is no such thing. As soon as I finished the one shirt, I wanted to create another one.

In the three years since my last post I have created several patterns, and a few more shirts. I’ve even gone to Hawaii and researched the flowers and clothes there. As I look at different paterns I like to figure out how to put Casual Tux into them. I’ve even been trying to figure out what other animal would be as cute as a penguin in a Hawaiian shirt.

So, this blog entry isn’t the end. It’s just the beginning.