Although Hibiscus flowers look good, they don’t look right without some types of leaves. I did alot of investigation into real Hibiscus leaves, as well as what people use in their pictures. I knew I needed at least three different leaves, but I found I could vary those leaves in more ways than I could the flowers.

Leaf1
My first leave was possibly the hardest. I wanted the leaf to look alot like a real Hibiscus leaf, with lots of ridges on the edges. Those ridges weren’t the hard part. Figuring out how to add leaf veins took me a long time. Eventually I discovered how to make the veins as one long line, and that’s what I ended up with. I rather like it. This is one long line. If you look at the SVG code, it’s just one, very long, line describing the leaf. 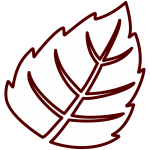 Leaf2
My second leaf stems from trials on what to put in the middle of the leaf. I thought of putting a leaf in a leaf, which didn’t really look good. But when I took all the ridges out of the middle leaf, it looked pretty good. I also did the opposite of what I did with the flowers. I started with leaf1, and all it’s outer ridges, and took many of them out and made the few that were left more pronounced. And thus leaf2 was created. 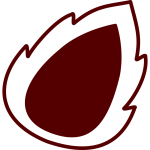 Leaf3
My idea for leaf3 came from a picture of a real Hibiscus flower, and it’s leaves. One of it’s leaves could only be seen from the side, and it looked pretty good. Once I say that, it’s not hard to see what I did. I took my first leave, cut it in half, then imagines what it would look like if half the leaf were pointing directly at me, and the other half was obscured by the first. I found that it gives a very nice variety to my leaves. 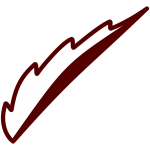 Summary
I found that I could do alot more variations with these three formats of leaves than I could with my flowers. They ended up bringing alot of variation and pop to the pattern I was developing. More on the pattern in my next post.