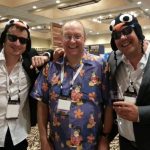 Many people might think this is my ultimate shirt. After all, it’s got Casual Tux on it, it’s purple, and to be honest, it looks awesome. But it is only my phase one shirt. My brother, who ran Kokopelli Shirts, made this for me. His friend created the design, my brother bought the fabric, his seamstress sewed the shirt. Vola’, an awesome shirt. 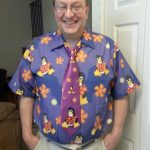 Even looks good with a tie.

But I have a picture in my head of my ultimate shirt. The front will be a nice Hawaiian shirt, and the back will have a large Casual Tux sitting in the middle.

These series of blogs will step you through my process of creating that shirt. It’s still not finished, so at some point we’ll go on the journey together.

I’m going to mothball Yor Linux.  I’ve backed up everything.  At the beginning of May I’m going to start cleaning up the repo’s and websites.

There are three main reasons that I’m doing this.

1 – I’ve proved to myself (and hopefully others) that a single person can still create their own RHEL Clone.  I’ve had a blast.  It was fun figuring out everything from infrastructure to building problem packages.  I feel that I’ve met all my goals that I set for myself.

2 – I looked at my user and website stats.  To say they were low would be exaggerating.  I believe I had one other user, and I’ve already talked to him.  My Hawaiian shirt reviews on my blog get about 1000% more visits than then entire yorlinux.org site.

3 – Bad hackers.  yorlinux.org has somehow gotten into some hacking database and gets hundreds (sometimes thousands) of hack attempts every day.  It’s really juts a matter of time before something happens like what happened to Mint.  I need to either constantly keep up the security fight, or bring everything down.  I can’t just leave my stuff up for others.

I want to thank everyone for their encouraging words as I’ve worked on Yor Linux over the years.  Like I said, I had a blast.  It was fun.  But it’s time to say good bye for now.

This is a repost from the Yor Linux blog.

I must apologize for the delays in my Hawaiian shirt reviews.  I’ve been working on a project called Yor Linux that has been taking more time than I anticipated.

Anyway, I’m finding Yor Linux taking more of my time than I expected, and my hawaiian shirt reviews were one of the things suffering because of it.

When I got my pcDuino3 Nano, I found that there were no instructions on how to get it to boot into Fedora. I’m writing this so that not only can others know how to do it, but others can hopefully make it easier.

You can now follow the generic Fedora instructions. If you are doing the installation manually (which I recommend) you should follow the instructions for AllWinner A20.

Because I don’t like just putting links in, here are the instructions.

Write the image to your media

After writing the image, read the new partition table and mount the root partition

Follow theses steps to write the appropriate U-Boot for your Hardware.

Media should now be ready to boot, insert into the device and boot.

Section 1 – Setup to boot off the micro-sd card

The pcDuino3 Nano is very picky about booting off the micro-sd card.

These instructions might seem complicated.  But they are really much simpler than the first few times I did this.  All of these instructions will work on Fedora, RHEL6+, or Scientific Linux 6+.

Section 3 – How to reset to factory settings

I managed to overwrite the build in flash, install fedora onto the built in flash with no way of logging in, and a few other fun things.  Resetting to factory settings isn’t as easy as it sounds, but they do have instructions.  Here is the video that takes you through the steps.

In the future, I hope to be able to do this on a Linux machine.

I got a pcDuino3 this past week. After doing some pretty extensive testing over the weekend I feel like I’m up for a review.
I now have 3 small arm devices. I’m pretty limited for space, so these little things are great for me. They take almost no room, and use very little power. I have:

Let’s be honest, there is no comparison.  Spend the extra $5 and get the pcDuino3 unless you need something very specific to the Raspberry pi.
Not only are you getting double the memory, 10x the network speed, a SATA port, dual cores that run almost 2 times faster, but you get the ARMv7 based CPU instead of the ARMv6.  I found that the the floating point processing in the ARMv7 made the difference on what I could use the board for.
Also, you can run Fedora, without modification, on ARMv7 boards.

It’s been six months since Red Hat announced they were joining forces with CentOS. I think things have settled down enough for me to make a post without controversy. I’ll use my usual question and answer format to answer the most common questions I’ve gotten.

Q: Did you know about the plans for the merger?
Yes. I was in the loop as a “consultant” for about 8 months.

Q: Why CentOS and not Scientific Linux?
There were pro’s and con’s for each distribution. I personally thought that Scientific Linux’s workflow and desire for others to create “spins” would have fit better with Red Hat’s goals. But the complications associated with working with goverment funded labs far outweighed the work that would have been saved by using Scientific Linux.

Q: What is Red Hat’s real agenda? Are they trying to get rid of RHEL clones?
If you read Red Hat’s press releases about why they wanted to do this, then you know what their real agenda is.
They are not trying to get rid of the RHEL clones.
Red Hat needed a way to be able to let people try their products that layer on top of RHEL. But how can you let people try them without giving away RHEL for free.
My best example is from OpenShift, the product I work on. We had OpenShift Origin that worked on Fedora, and we had OpenShift Enterprise, that works on RHEL6. But we had no official way for users who didn’t already have RHEL subscriptions to try OpenShift on an enterprise OS. After the team up with CentOS we are able to have users try OpenShift Origin on CentOS.

Q: Do I think the whole joining of forces thing will work?
Yes. I think there is still going to be some rough patches. But I think as the months turn into years, those rough patches will be worn smooth.

Q: How does this affect Scientific Linux?
I am unable to comment on this question at the present time. Not because anyone is silencing me. But because currently I don’t know. There are multiple paths that Scientific Linux can take, and they are proceeding with caution and due diligence.

Do you still enjoy working at Red Hat?
Has the enviroment changed after the novelty wore off?

Yes, I still love working at Red Hat.
I no longer wake up, surprised to find myself working at Red Hat, so in that sense, the novelty has worn off.
But, even after two years, the Red Hat culture still feels like a custom fit to me.

Yes.
The team has grown quite a bit, but it is still an awesom team to work with. There is the occasional disagreement over an issue here or there. But everyone looks at the real goal, and works out the best way to do it.
Besides the great people to work with, I really like that OpenShift has transformed into a three pronged project. OpenShift Origin has all the source code out there if you want to set up your own OpenShift infratructure on your own. OpenShift Enterprise let’s you setup up your own OpenShift instrastructure with our help and support. And then OpenShift Online, for those who just want to use it, ready made.

Any interesting stories to tell?

It’s always interesting having people from Sales contact me, asking for the inside scoop on RHEL clones. Even though I work for Red Hat, I still feel the same about RHEL clones. I feel RHEL should be used in your production enviroments and/or when you need support. But you should use Scientific Linux in your testing and/or development enviroments. They never like to hear that, and they rarely contact me again. My Red Hat is off to the one sales guy who not only contacted me again, but allowed me to speak to their customer.

The Open WebOS team is hard at work. As soon as I finished my post to build OpenWebOS on Fedora 16, they had already updated the build script to include more items, particularly the web browser. The browser required libraries that were only found in Fedora 17.

I had been looking for an excuse to update to Fedora 17, and now I found one.

Unfortunatly they aren’t prepared for a bleeding edge distribution like Fedora. The library pbnjson that they want to build, doesn’t like the yajl version 2.0.4. Fedora 16, and all of the supported Ubuntu versions, have yajl 1.0.x. And this library builds just fine with all the 1.x version.

So, to make a long story short, I’m working on putting things into rpm’s, so that I can build these packages on my terms. It will take me longer than using their script, but I will have more control, and it will be more reproduceable.

So far, I am using the system cmake, and I have made the cmake-modules-webos rpm.

As I work my way through each module, I’ll see if I can just use the system version instead of the Open WebOS version. Hopefully that will make things more system independant.

Steps:
We are going to be following the from Open WebOS, but only modifying them to work on Fedora. When in doubt, follow the official instructions.

3 – Build and Install
From this point on, our steps are the same as the official instructions. But I will put them here so you just have one page.

3 – Start and Run
Again, this part is straight from the official instructions.

I’ve been working at Red Hat for six months.  I want to answer the two questions I’m asked the most.  Is working for Red Hat what you expected it to be?  Do you regret leaving Fermilab and Scientific Linux to work on OpenShift for Red Hat?

Is working for Red Hat what I expected it to be?

Yes, and more so.

Their dedication to Linux and open source was one of the main reason’s I wanted to work for Red Hat, so I was glad to find out how pervasive it is through the whole company..  They try to have the whole company open to all the employee’s as much as possible.   They try to support not only open source, but openness in all things, such as open hardware and open government.

Do I regret leaving Fermilab and Scientific Linux to work on OpenShift for Red Hat?

Although I loved working at Fermilab, and I loved making and maintaining Scientific Linux, t I also love working on OpenShift.  It is fast paced, great co-workers, I’m learning a lot, and I am working on a project that I think will help alot of people.

One thing I’ve been learning, is how to work with a large team of people.  I’ve had to learn that I don’t have to do everything myself.  It is a little scary letting others do what you could do, but it’s also very refreshing once you get used to it.